﻿harkback is a home for re-retro literature and other past-gazing, forward-thinking projects that sift through the fallout of recent pop culture. It's also the once and future resting place of writer Matthew Heiti.
​

Born in a meteor crater, Matthew Heiti is a writer, teacher and theatre creator roughing it in North Ontario. He holds a BFA in Acting from Ryerson University and an MA in Creative Writing from the University of New Brunswick. His writing has appeared in many journals and his first novel, The City Still Breathing, is published by Coach House Books.

His plays have been workshopped and produced at theatres and festivals across Canada. For 5 years, he ran the Playwrights’ Junction at the Sudbury Theatre Centre, a workshop for developing writers, and he has served as playwright-in-residence there and with Pat the Dog Theatre Creation, where he helped found PlaySmelter, the region’s festival of new play creation. He is a Genie-nominated screenwriter and his play for teens, Black Dog: 4 vs the wrld is published by Playwrights Canada Press.

He makes new work in strange places with Crestfallen, and sometimes gets nostalgic. In his spare time, he is usually working.
[photo credit: Gerry Kingsley]
​

By messenger pigeon or: matthew(dot)heiti(at)yahoo(dot)ca

A body is found on the side of a highway. Naked, throat slashed, no identification. It disappears from the back of a police van and begins a strange odyssey, making its way, over the course of one early winter night, all around the northern town of Sudbury and through the lives and dreams of eleven very different people.

REVIEWS
'Heiti's Sudbury is a dark place, his characters caught between the desire to stay and the urge to flee ... The City Still Breathing brings to life the strange, proud beauty of has-beens and also-rans in one relentlessly hard-luck town.'
- The National Post

"Two constables find a dead body, naked and unidentified, by the side of Highway 17, only to somehow lose it in the police station parking lot. That’s the setup for Matthew Heiti’s dark but loving ode to 1980s Sudbury..."
- The Globe and Mail

"One of the best works of dark humour I've read in years."
- Owen Sound Sun Times

"A lovely book, and a wild ride, right to the end."
- The Fiddlehead

'Matthew Heiti is our daring designated driver, taking us to places we thought we knew but have never truly seen before, in a car full of characters we won't soon forget. His writing is vivid, beautiful and profound.'
- John K. Samson

"This is a book with brains and muscle, resonant and intense, and Matthew Heiti is a prodigious talent, the spooky bard of mullets and muffin-tops, grow-ops and stolen snakeskin boots on Highway 69."
- Mark Anthony Jarman 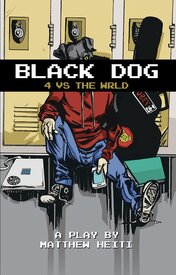 Two is fraught. While dealing with the impossible expectations of her parents, she is trying to understand why her brother, a bright and talented teenager, has taken his own life. It’s not until a fateful school detention that she meets three other students who all seem as lost as she is. There’s Three, a quiet, misunderstood guy who doesn’t quite know how to care for himself; Four, the fashionable, popular kid and class clown; and Five, a rebel ready to fight against everyone and everything. Despite their differences, they each grapple with depression and anxiety and become an unlikely source of comfort to one another. As the four unite to battle teachers, parents, therapists and their own demons, their promising futures begin to reveal themselves.

Black Dog: 4 vs. the wrld
Sudbury Theatre Centre (2013, 2014)
Theatre UNB (2019)
"There's some heartbreaking moments in Black Dog: 4 vs the wild. 'It’s like the Breakfast Club but only realer and rawer,' said one woman in the audience. Well put nameless audience woman. You beat me to it."
- Lara Bradley. The Sudbury Star

Mucking in the Drift
Sudbury Theatre Centre (2013)
“This is an important play, not just to Sudbury, but to every northern town and city, every community with a resource-based economy that has, for decades, suffered the slings and arrows of outrageous fortune (and boom and bust cycles). Speaking of the audience, the reaction from the opening night crowd was the envy of directors and playwrights the world over. There were gasps, words of recognition bubbling unbidden from mouths too invested in the story to keep quiet.”
- Mark Gentili, Northern Life / Sudbury.com

Plague: a [sic] love story
Crestfallen (2013)
Ou est Billy ou ou (2017)
"This is the neatest piece of theatre. Actually, I’ll step it up to deftest and cleverest... You’ll get that glowy feeling of having experienced something new and edge-of-your-seat intense that will make you want to chat with the people sitting near you."
- Lara Bradley, The Sudbury Star

"Although there are no shortage of apocalyptic tales these days, playwright Matthew Heiti brings a fresh eye to the daily struggle of the survivors. The end of the world just might involve a lover’s spat over tomato soup in a hermetically sealed apartment. Heiti achieves a fine balance for the couple between being challenging and tender."
- Amy Ward, Mooney on Theatre

“★★★½ The power and pleasure of Aviatrix: An Unreal Story of Amelia Earhart is that at some point, deep into Matthew Heiti’s compelling drama about the what-ifs behind Earhart’s 1937 disappearance, he manages to squeeze every one of us into the cockpit alongside Amelia.”
- Stephen Hunt, Calgary Herald